If look back, to even just a few years ago, I can’t believe how far I’ve come. But I’ve not done it alone. I’ve achieved it by holding on to all the hands outstretched towards me, overcoming what I thought was an insurmountable barrier – that of being a woman.

My journey began 48 years ago. Now, I have a husband and four adult children. I grew up believing that marriage was not just inevitable but a blessing. I thought that if you were not a wife, you were nothing.

So, I put up with it all: the fear, the shouting, the beatings, and the infinite number of times I was told I was stupid and that I would never achieve anything. What initially seemed unbearable became acceptable – I simply got used to it, one insult at a time.

Then, what seemed like a tragedy at the time, was actually the first hand outstretched towards me. The company I was working for as a cleaner unexpectedly fired me with no pay. By chance, I was told about a micro-credit project to help women start their own businesses, and I joined the project. Since then, I have learned that being a woman is nothing to be ashamed of.

Together with five other women, I founded a savings and credit cooperative. We also welcome men because we believe that equality is only possible if we advance together. My family now turns to me if they have any problems, and I work with children and young people to help build a different model of society. It has been a long journey along which the hands of those who supported me belong to the people I met at the center, the sisters who accompanied me, and all those who believed in me.

Now, I am ready to stretch out my hands to help those in need.”

Beralia is a participant in the ‘Mujer Levántate y Anda’ micro-credit project which started in 2015 in Honduras as part of GSIF’s Capacity Development and Empowerment Program in Latin America. It promotes the financial inclusion of women in vulnerable situations who cannot access credit by supporting them to start their own micro-enterprise. In 2021, more than 350 women participated in training sessions and workshops and received mentoring to develop their business plans.

Please send us an email and we'll get back to you. 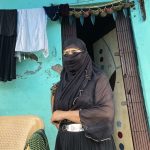